Object detection is one of the areas of computer vision that’s just exploding. Object localization which means not only do you have to label this as say a car, but the algorithm also is responsible for putting a bounding box, so that’s called the classification with localization problem. Defining the target label y :

Neural network just output x and y coordinates of important points in image sometimes called landmarks that you want the netural network to recognize. The labels have to be consistent across different images.

There’s a huge disadvantage of sliding windows detection which is the computational cost :

So before the rise of neural networks, people used to use much simpler classifiers

Turn fully connected layers in your neural network into convolutional layers It turns out a lot of this computation done by these 4 ConvNet is highly duplicated Sliding windows convolutionally makes the whole thing much more efficient, but it still has one weakness which is the position of the bounding boxes is not going to be too accurate.

A good way to get this output more accurate bounding boxes is with the YOLO algorithm, YOLO stands for you only look once. The basic idea is you’re going to take the image classification and localization algorithm and  what the YOLO algorithm does is it takes the midpoint of each of the two objects and it assigns the object to the grid cell containing the midpoint. The advantage of this algorithm is that the neural network outputs precise bounding boxes as follows so long as you don’t have more than one object in each grid cell this algorithm should work okay. Assign an object to grid cell is you look at the mid point of an object and then you assign that object to whichever one grid cell contains the mid point of the object. This is a pretty efficient algorithm and in fact one nice thing about the YOLO algorithm which which accounts for popularity is because this is a convolutional implementation it actually runs very fast so this works even for real-time object detection. The YOLO paper is one of the harder papers to read. It’s not that uncommon sadly for even you know senior researchers to read research papers and have a hard time figuring out the details and have to look at the open source code or contact the authors or something else to figure out the details of these algorithms.

One of the problems of object detection as you’ve learned about so far is that your algorithm may find multiple detections of the same object so rather than detecting an object just once it might detect it multiple times non-max suppression is a way for you to make sure that your algorithm detects each object only once.

Non max means that you’re going to output your maximal probabilities classifications but suppress it close by ones that are non maximal so that’s as a name non max suppression.

One of the problems with object detection as you’ve seen it so far is that each of the grid cells can detect only one object What if a grid cell wants to detect multiple objects here’s what you can do you can use the idea of anchor boxes. 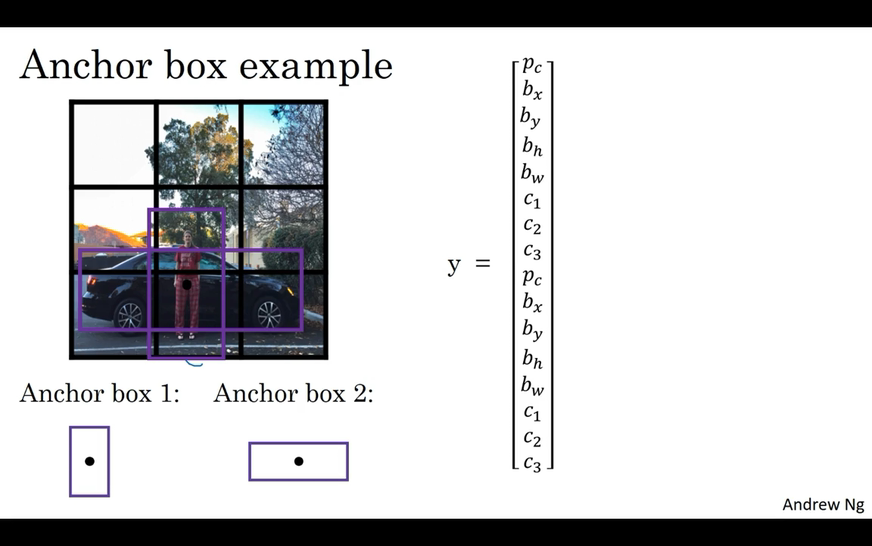 Echo object in training image is assigned to grid cell that contains that object’s midpoint.

Echo object in training image is assigned to grid cell that contains object’s midpoint and anchor box for the grid cell with highest IoU.

Now just some additional details what if you have two anchor boxes but 3 objects in the same grid cell that’s one case that this algorithm doesn’t handle it well. Anchor boxes gives you is it allows your learning algorithm to specialize better in particular if your data set has some tall skinny objects like pedestrians and some wide objects like cars then this allows your learning algorithm to specialize. How to choose the anchor boxes :

Putting it together: YOLO algorithm 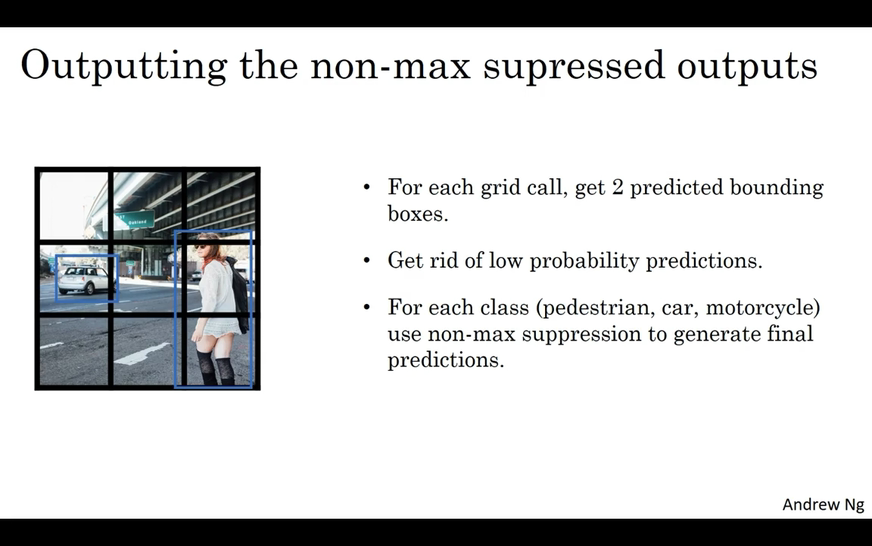 One of the most effective object detection algorithms that

also encompasses many of the best ideas across the entire computer vision literature that relate to object detection.

Algorithm convolutionally but one downside that the algorithm is it just classifies a lot of regions where there’s clearly no object. Faster algorithms :

Although the faster R-CNN algorithm most implementations are usually still quite a bit slower than the YOLO algorithm. The idea of region proposals has been quite influential in computer vision.